Today, I went up north to do "Rutland Water and Back". 32 caches, plus some extras along the way.

The first extra was a puzzle cache - it was a word search, which I did, but I couldn't see how  to get coords out of it. So I just guessed where it was, and I was spot on.

The second extra was a multi. I gathered the info, worked out the location of the first micro, which looked to be in a plausible place ... except that it was in the same place as one of the traditional caches that I'd be doing in an hour or so. And when I got there, the traditional cache was at the foot of the tree, and the micro for the multi was about six feet above it!

That's not supposed to happen - there's a rule that says that caches, or any physical stage of a multi, have to be at least 528 feet apart.

So then I went to do the final, and that was 18 yards from a cache I'd done earlier.

On my travels I met:

A cycling muggle, who engaged me in conversation when I stopped to get a cache, until eventually I just picked up the cache and signed it while he watched and I explained to him about caching.

A pair of old ladies with their two dogs, who I met again later on in the circuit.

Two young women with four children and three dogs, who sort of hovered around while I was looking for a cache until I asked them if they were cachers, and they were. And then I found the cache. Torches for each of the children! One of the kids asked me if I was a kidnapper, so I told him, not until he's at least six inches taller.

And I saw this: 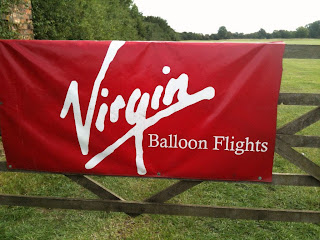 You won't get me up in one of those things. I'd want an experienced pilot.

Quite early in the circuit I fell off the bike, but it was a very slow motion fall, and I was already low down when I fell, so no damage done, except that there's a small patch of vegetation that will remember today for a long time.

On the way home, I went down the A1; that took me out of my NW quadrant, into my NE quadrant. That meant that I didn't have the caches loaded on my PDA as I was driving along, but I did have them on TomTom; I could see them on my satnav, but a satnav isn't accurate enough. So it was a live test of the new system I've developed that lets me have all of the 50,000 unfound caches within 150 km of home. I loaded up segment 15, and that gave me the locations and icons on Memory Map, so I could continue caching on the way home.

My bike won't go any lower than third gear, so tomorrow will be bike maintenance. Also, the bell has stopped working, one of the handlebar grips needs replacing, the big spring needs greasing and I ought to check that the brakes aren't too worn.

My new computer (6 cores, 3.5 GHz, 8gb memory) is working like a dream. I think the main improvement came from the increase in memory; the old box was 1gb, and it was very often needing to resort to disk-swapping, which meant long delays while it sorted itself out. And I don't see a way to upgrade that motherboard to more than 2gb.