To Ringmer today. I had a look at the route on the map, and decided that I'd do it on foot. Good decision; there were a lot of difficult stiles for lifting over, and about half of the track was either bike-unfriendly, or downright bike-hostile, even wheeling the bike would have been difficult. 40 caches done in 5 1/2 hours, then lunch in the car, then 20 more drive-bys (or nearly so). 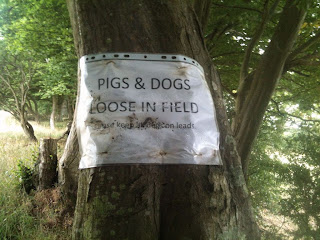 The route took me past a gliding club, and I was gazing at their field when I heard a whooshing noise from just above my head - it was one of the gliders coming in to land.

The eight mile walk has left me feeling seveerly broken, though.
Posted by drsolly at 23:06