A difficult day in Rockingham

The day started badly. The whole time I was driving north, it didn't stop raining, and when I arrived it was still drizzling a bit. The weather forecast had warned me of the possibility of a bit of light rain, and that's what I was seeing.

So I parked, got the bike out, put on my camo coat to ward off the wetness, loaded up with water and a spare battery, and pedalled off.

On the first cache, I parked the bike on the bridleway (which was tarmaced), stepped into the hedge alongside and started to hunt for the cache. A Landrover drew up alongside my bike, and a man got out. It was at that exact moment that I spotted the cache hanging on a tree and grabbed it. The landrover man came to the gap in the hedgerow; I put the cache in my pocket. "Are you OK," he asked, meaning "what are you doing?" "Yes, I'm fine, thanks," I replied, meaning "I'm fine thanks." That usually is the end of the conversation, but he wanted more. "What are you doing," he asked. "I'm admiring the trees," I replied. "I don't believe you," he opined.

Well. I've never had that before. Well, I have, actually, but not often. So I looked a bit sheepish, and said "Well, if you must know, I've stopped off to have a wee." "Can I see what you've got in your pocket?" he asked, pointing to where I'd just put the cache contents. So I took my hand out of my pocket and showed him my car keys.

Then he wanted to know what I had in my caching bag. "I'm not telling you," I replied, and decided to play a more active role in this exchange, "and who are you anyway?" "I'm the gamekeeper," he replied.  "And do you have any proof of that?" I asked. "I can give you my phone number," he offered. I took out a pen and paper and got ready to write it down. "What's your phone number?" he asked. "I'm not telling you," I replied. "Then I won;t tell you mine," said he. "Well, fair enough" I said, "but you do know that this is a public bridleway?" I said. "Yes, but not if you go into the hedge," he replied. So I came out of the hedge, and said "Then I'll just have to wee at the side of the track." At which point, I think he realised that A) I wasn't there to steal his hedge and B) he was being a bit unreasonable. And he generously allowed me to go back into the hedgerow to have my wee. And he drove off. So I was able to replace the cache log and lid. Right through this exchange, his face was about six inches from the cache which I very carefully didn't look at. And he didn't see it.

The next few caches were along the same bridleway, and I was constantly worried that Landrover man would reappear, and my excuse-me was going to sound a bit thin. But I didn't see him until just after I'd turned off his territory, and we cheerfully waved at each other as I biked off at a right angle to the tarmac.

So that resolved OK.

The next big problem was wasps. At cache number 16, I found GZ quickly, a big tree, but before I had a chance to search, I noticed quite a lot of wasps buzzing around. And then I spotted the cache - it was precisely at the entrance to the wasps nest.

I've had dealings with wasps twice before. They do not like people poking around with their nest, and several of them dive-bomb you with their stings. And the only defence is to run like hell. Or bike away fast. In order to get hold of this cache, I was going to have to move some wood at the entrance to their nest, grab the cache, then replace cache and wood. You might think that it was rather cowardly of me, but I decided not to risk it; half a dozen wasp stings quite ruins your day. I know, it's happened to me. Twice.

Then I departed from the route to pick up a cache that I'd DNFed a while back; this time, the cache was there and I found it. Then back to the route, and round about number 20 or so, I met the next big problem - mud.

Now I'm as fond of mud as the next man; jumping in muddy puddles is one of my hobbies. But this was the sort of gluey clingy mud that adheres to your bike wheels and makes it impossible to push along. Forget about biking, you can't even walk the bike. I was having to stop and dig  the mud off the wheels and brackets every 20 yards or so. The next 300 yards, which should have taken about a minute on a good track, took about an hour, and left me knackered.

Eventually, I got off the mud onto a decent surface ... only to realise that I had another 500 yards of mud to traverse through the next field. No way, I thought, and went a long way round instead, along the edge of the field.

Eventually, I got clear of the muddy tracks, and the rest of the route was on tarmac. Whew!

I sat in the car eating my sandwich (diet, one sandwich, around 300 calories) and drinking coffee (skimmed milk, no sugar) and thought about abandoning the rest of the day. Because of the general wetness, my camo coat was quite wet, my trousers were wet from going through wet vegetation, and my boots ...? I was wearing my non-waterproof boots, big mistake, and they were full of water. I took off boots and socks, and wrung out the socks; quite a lot of water came out.

But I was prepared. I had a spare pair of boots and socks, and my summer trousers are so light, they dry out very quickly. And the rain had stopped, and there was even a bit of sun, so I wouldn't need the coat.

I decided to soldier on.

The second route today was another 30 caches. I went round on the bike, and it was very fast; I was doing about a dozen caches per hour. No stiles, no mud. Wonderful.

So I did a total of 66 caches today, with no DNFs.

A couple of fun things I saw today.

You don't expect to see a number 6 Routemaster here! 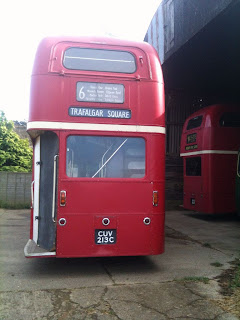 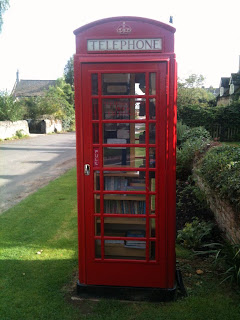