The Isle of Sheppey

I went to the Isle of Sheppey yesterday. The weather was fine (no rain, but not too hot) and I had a late pass from ladysolly, so I was aiming to do all the caches on the island (30 or so) in the day's outing.

Sheppey is very proud of being the birthplace of British aviation; I saw several reminders of that.

I started off in the Isle of Harty, where there were ten caches, including one multi. I went round on the bike, and found them all. At one, I found this. 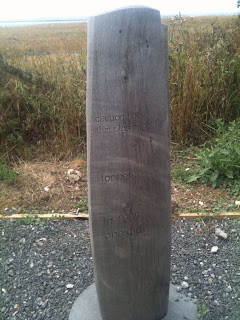 This is a reference to the first recorded flight of a pig. But it wasn't from where the plaque is, it was fron Leysdown, a few miles North of here.

There was a great view from here. 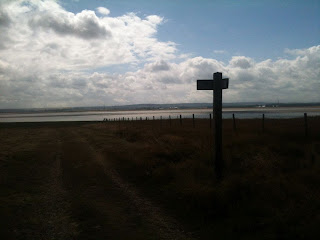 Then I went to Eastchurch, and did the caches there, including a multi that took me to Leysdown via this memorial. 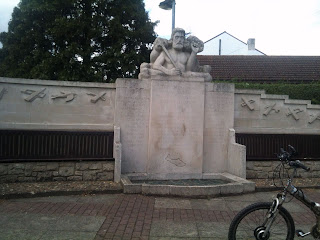 One of the caches there, GC33HVY was my first DNF of the day. It was a tangle of wood and trees, and I just couldn't find a cache. But worse - there was a barbed wire fence, only about ten inches off the ground, and going to and fro, at one point I forgot about it, and instead of stepping over it, I walked into it, and measured my length on the ground. No harm done, although my shins were very unhappy.

Here's a statue of the three Short brothers, pioneers of aviation. 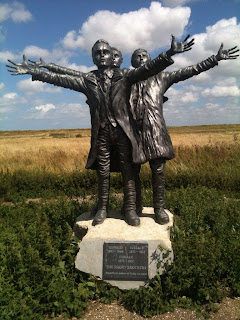 Then on to Minster, for four more caches, with another DNF (a micro on a very heavily ivy-covered tree).

My next stop was Barton's Point, where I biked around the Recreation Center, but missed number 6. I found a plaice where the cache should be, but it wasn't a fake plaice. It was fairly fresh, but it won't stay that way.

Then to Queenborough; four caches, but in trying to get to "Sheppey Views", I found I couldn't approach via the footpath from the south, I just couldn't find where it came out on the road. So I went round to the North and got to it that way. The view was indeed great. 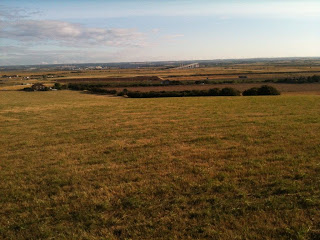 On the way back to the car, the bike battery expired (I'd travelled a lot further than I'd expected to), so I had to rely on pedal power alone; it wasn't too bad, the road was fairly level.

Then to the South Marshes, near where the big bridge runs. There's actually two bridges there, the old one that you can hardly see from a distance, and the new one which rises on a viaduct and can be seen for miles.  Here I did a few more caches, including one that's a couple of hundred yards inland from the sea wall. I must have spent an hour biking round a maze of twisty little tracks, all the same. I got to within 60 yards of the cache, but the nettles and brambles were head high, so there was no possibility of cutting off-track to get it. Eventually, I got so lost that I couldn't even find my way back to the sea wall. Eventually, I did get back to the car, but no cache.

Going out, I went round the M25 northabout; going home, the satnav took me southabout, so in the course of the day I circumnavigated London, and found 29 caches. By the time I got back home I was well tired, and happy that today I couldn't go out because of a dental.