First, a disaster narrowly averted. You remember I changed the front tire on my bike? Just before I set off today, I had a feel of the front wheel, and it was flat. It wouldn't actually have been a disaster to go out with that, because I have a spare inner tube and all the tools I need to change it, but it would have been quite annoying. Instead, I took bike.3, a 20-inch wheel foldable, the one I repaired the bottom bracket of a couple of months ago. Because bike.2 is out of action, waiting for the slow boat from China. Which, I understand, is still being rowed sollywards.

So, I didn;t actually march, I biked.

When I got to March, I did the Hereward Way, a bike ride along a drainage canal. Then I did another ring of about a dozen, and that was it - about 40 caches, but several DNFs. For one of the DNFs, I turned up at GZ at exactly the same time as a pair of workmen with spades, and they proceeded to dig up the local lamppost, in order to replace it. This lampost might or might not have concealed the cache, but if it didn't, I'd still be hunting for the cache about five feet away from two vigorous diggers. As I left, the mini bulldozer arrived.

At one point in my travels, I crossed the Meridian, always an exciting moment. 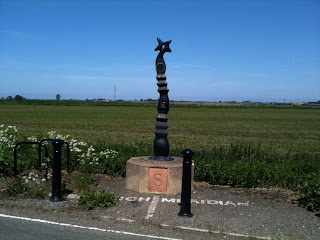 Actually, I crossed it twice, but the second time didn't have a nice monument.

While doing the second ring, I took the A47(T) instead of the old A47. That got me onto a dual carriageway with a central barrier, and by the time I realised that I needed to be 100 yards south of that road, it was too late. So do I carry on for several miles and double back at the next roundabout? Not on a bike, I don't. I got off, wheeled the bike back on the rather wide grass verge, then climbed over a nearly-impossible barbed wire fence (with the bike) to get to the old A47.
Posted by drsolly at 22:19