Back to Ashford. But first - one of my servers failed. Inspection reveals that one of the hard drives thiks that it has zero gigabytes (actually it has 1000 gb). So I had to start off today with spending several minutes bringing up backups for that server.

Then, when I finally got out, traffic on the M25 was pretty bad, so a journey that should have taken 1 1/2 hours, took more like 2 1/2. Fortunately, this was going to be a long day out; ladysolly is playing bridge tonight, so I have a Late Pass.

But eventually, I got to Ashford. First I did a small ring; 8 caches plus a few extras. Then I relocated and did a lot of swanning about. I wound up with 36 caches, which isn't much for such a long day out.

Part of my route took me alongside the High Speed rail line, and I had hoped to get some great pictures of the train flashing past. It was not to be. So I took a picture of where the train would have been. 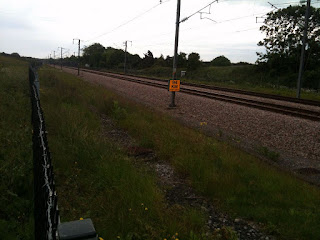