Ladysolly's out late today playing bridge, so I had a long day out; just South of Melton Mowbray. And it was a lovely sunny day, so hot I took off all sweaters and just wore a t-shirt and my light coat.

First a series of 29 caches (but one was a DNF), the PC series, starting from Somerby. Then another series with the same starting point, the SyC series. And just as I got to the most southerly point of the series, the electric motor on my bike stopped working. That's very annoying, but not catastrophic, since at that point, I still have a bike that I can pedal. A very heavy bike, with two heavy batteries weighing me down, but the route from that point on was tarmac, so I was able to huff and puff to the end.

I think the problem is the motor controller, because the motor itself still works, in fits and starts. Fortunately, I have a spare controller, I can take it out of the bike whose front wheel has become very wobbly. And fortunately, I still have a working bike, since I repaired the 20 inch wheel bike very recently.

Then I went to Great Dalby, there's a bunch of caches around the village, mostly on footpaths, so I did it on foot. Not that I had much choice, of course. Then on the way home, I did a few more (and I met the cache owner at one cache) taking the total today up to seventy-two.

In the middle of a field, right on the footpath, I found this chap's grave. 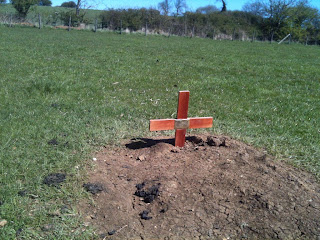