First, a circuit of 36 caches, plus a couple of extras, along the Lyvedon Way. Most of the track was pretty good, although wet. Some of it was so wet, that I was cycling for 20 yards, then through a puddle ... except that the puddle was a lake, six inches deep, with no way around it. So I just powered forward and hoped that I'd be able to get through and out the other end, because if I got stalled in the middle and needed to put a foot down, I'd have a bootfull of water. But I did managed to get through all of them; ther's mucst have been a couple of dozen..

Then up to Oundle, picking up a few along the way, and another smaller circuit. At the last cache I did, I couldn't find the cache, but while rummaging about under a hedge I found this. 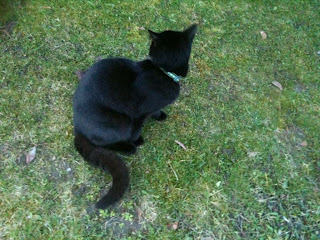 If he knew where the cache was, he wasn't telling. So I took a picture of him.

So, 60 caches found today, my trousers are wet and muddy and I had to power-wash the bike. I seem to be doing that every day these days - it's all that mud.
Posted by drsolly at 21:49