Out to Stow Longa today, for a day on the bike. Two great things about biking in Huntingdonshire - there's no hills, and there's very few fields with animals. It's not that I mind sheep and cows, but the lack of farm animals means that you get very few stiles to deal with. 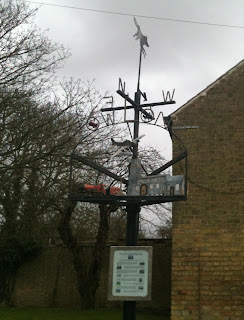 And here's the explanation of what the elements represent. 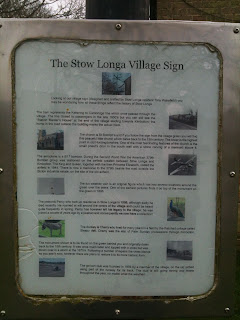 But I think it's possible to overdo civic pride. Here's the rubbish bin in Stow Longa 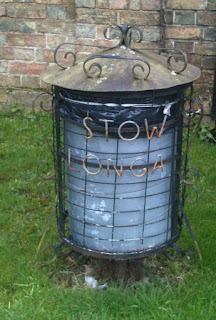 I got round 46 caches in about four hours; that included a one-kilometer diversion to pick up a "Woolley Mammoth" cache (I've already done that series, so this one is an extra. And to my surprise, no-one else had done it yet, so I got a First-to-find. It's pretty rare that I get a first-to-find, usually the local First-to-find fiends grab them a few minutes after publication.

After I finished the route, I did a few more to bring the number today up to 50.

The bike performed well; I'd replaced the rear brakes yesterday, and although the main bearing is still slightly wonky, it's not so bad that it's a problem just yet. But the key for the power has fallen apart. I'll have to use a pair of pliers to turn it, if necessary.

When I got back to the car, at about 14:30, and while I was eating lunch, it started raining, so I got round just in time. But then another problem cropped up - I wasn't getting electricity out of my inverter, the thing that transforms 12 volts from the car battery, to 240 volts, so that my various gadgets can run. I tracked it down to A) the fuse in the inverter had gone, and B) when I replaced that, the inverter itself refused to run. So I'm now using my backup inverter, and I've ordered a new backup - they really are so cheap these days; about £12 for a 200 watt model (which is really the maximum you should take).