A long day on the bike

Today, I went to Great Gidding; I did a ring of 40 caches, plus another ring of 15. It was cold ... again. Will spring never come? One of the caches I tried to do, was buried under a ton of snow. The cache was supposed to be under bricks, but I couldn't even find the bricks.

Another cache I did ... that's been a serial disaster for me. The first time I tried, I misguessed one of the numbers, went to a place that looked a bit plausible on the map, but was totally wrong. So then I went to the right place, and found the bridge I was expecting, but no micro.

I went back after the cache owner replaced the micro, and that gave me the coords for stage two. But stage two was missing.

So the cache owner replaced stage two, and today I went there again, on the bike ... and thereby hangs a tale. To do this cache, I'd relocated a drive of 20 minutes away, and when I got the bike out once I'd arrived, I immediately noticed that one of my panniers was missing ... the one with the battery that still had charge. I'd left it back at the first place I'd parked! So I used a much older battery, which I knew would only give me a couple of miles, and when I'd finished at this cache, I went back, and was glad to see my pannier was still there. Whew!

So I biked down and quickly found stage two. That took me to a place where there was lots of wood, but no micro. So I phoned the cache owner, and got the coords for stage three. I found stage three, but it wasn't where it should have been, it was visible on the noticeboard. Stage four was another washout, nothing there, stage five likewise. At each of these failures, I made another call to the cache owner, who gave me the coords for the next stage.

So at last, I had the coords for the final. But when I got there, where the cache should have been, there was a couple of tons of earth, dredged from the ditches nearby and dumped in the corner of the field. Another phone call to the cache owner.

This has to be the only cache I've ever done, where I got five DNFs. 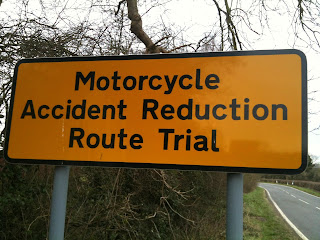 I have no idea what they're trialling. That notice was the only thing I saw.

Later on, I saw this fine pair: 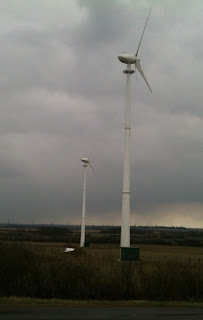 57 caches done today, and one DNF.