I went north again, to do a ring near Thurning. On the bike, even though the ground was wet. The first dozen or so caches were on a track that had been thoroughly chewed up by horses (plus it was rather soggy), and it was a major effort to bike along it. But after the first dozen or so, the track improved, and by the time I was in the last dozen, I was on a very good surface, so I simply bowled along.

There wasn't any rain until I got back to the car, but it was very misty; visibility was about 100 yards. 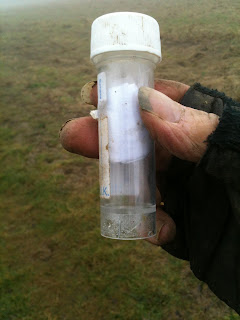 As you can see, it's a urine specimen bottle. There's probably a message there, but I'm not going to spell it out.