I put the Big Pi into a case. I was a bit too optimistic about how many drives I could cram into that case; I could *just* about get twelve in, but it would be *extremely* crowded in there, and difficult to sort out any problems (and the overcrowding would actually cause problems). So I decided to use only nine drives. That also means that I don't need a second Ubec for power.

Mounting drives takes 20 seconds per volume (two volumes per drive), which is a lot, but I can live with it; it means that starting up the whole thing from cold takes a bit less than eight minutes. But since this is meant to be a data server, it shouldn't need starting up from cold except very rarely.

I was able to use a power supply that couldn't power a normal PC (in my experience, power supplies become weak when they get elderly - I know how they feel). That's because the weakness of the PSU is masked by A) the fact that it only needs to supply 72 watts (it's rated at 300) and B) the Ubec will output a steady 5.3 volts no matter what the input voltage is. 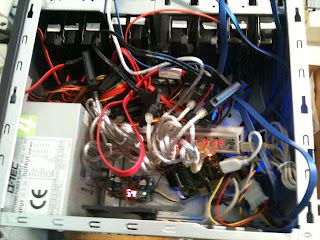 Bottom left you can see the Qtec PC power supply; next to it is the Ubec, showing that its output is 5.4 volts. The Pi is next to that. Just above the Pi is the 10-way hub, and the profusion of white cables sprouting from that lead to the 9 USB-to-Sata things, and a red or blue cable from each of those go to the hard drives, which are at the top of the picture. Each of the hard drives has a label giving its serial number, so that when one fails, I don't have to take them all out to find the failed unit. There's a fan right at the back of the case (the bottom of the picture), another one in the power supply, and two more blowing over the hard drives.

The box is a standard tower case, made of very thin metal, which gives the advantage that the whole thing is light enough that I can pick it up without worrying about doing my back in.