Down to Portsmouth today. The snow has melted, but I'm guessing that the ground will be extremely soggy from the thaw, so I wanted to spend the day on tarmac. I haven't been to Portsmouth for a while, and there's loads of caches there for me to do. And on tarmac, so I can go by bike.

First I did a series "The Dirty Dozen". These were all good caches, some quite difficult, and pretty innovative and/or unusual. I was worried about doing this series, because Esscafe, the Number Two cacher in the UK, did it yesterday and was unable to find three of the 11 caches, so I thought I'd probably fail on at least that many.

But it turned out well! Some of them were quite difficult, but with a bit of luck and persisrtence, I managed to find all 11 and then the bonus.

After that, I trundled the bike south, towards the naval base and the center of town, until I wound up at the D-Day museum. I got a total of 41 caches (plus a few DNFs).

It's not often I see a type of cache I've never seen before. But today, I saw two caches like that. Well done Pompeians!

I saw this along the way. 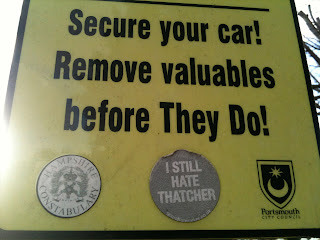 "I still hate Thatcher". Wow, the Socialist Worker has a long memory.

At the end of the day, I wound up at the D-Day museum, at the statue of Bernard Montgomery. I remember a cache I did a long time ago, where I visited his grave.