Today I went north up the M1, to do a bunch of caches on the Jurassic Way. The whole route was on bridleways, byways and roads, apart from a short footpath stretch, but I could bike around that on the roads. So I went by bike.

I used one of my inferior pairs of boots, and they are completely non-waterproof, a fact I'd forgotten. Oh well.

I started at 10:30, and immediately spent far too long looking for a micro that was hidden very close to the place I forst looked; I should have spotted it then. I got it eventually, and then proceeded.

The ground is still very soggy, although is just about bikable. About half way round, I was going along a canal towpath - they're always good for biking, and very level, of course. There was a group of about half a dozen me cutting back the brambles at one point, which is a worthy activity, but unfortunately, they were just at the point where a cache was. I was thinking about leaving that one, but then I spotted where it was. So, casually, I leaned on the tree, snaffled the cache, signed the log, then leaned casually on the tree again to replace it. And then I biked off.

A bit further along, I saw this. 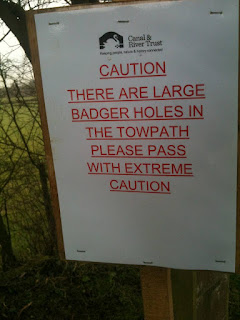 And there certainly were some very big holes along the track!

Near the end of the route, the bridleway cut across the middle of a field, and I could see where people had gone that way. I made the mistake of following their track, and after a few yards, I got bogged down in totally claggy mud. Eventually, I had to pick the bike up (no small thing with an electric bike plus three heavy batteries) and take it to the edge of the field, where at least I could make some progress.

I got back to the car just as it started a combination of rain and snow, and sat inside eathing my lunch (at 4pm) very glad I wasn't still out there!