I returned today to finish the forest. First, I parked in a different place, at N 51 4.4 E 0 30.01. That was partly because I was going to do the northern part of the forest, partly because I didn't like the "lock you in after five pm" policy, and partly to save £8.50. I'm not the only one who parks around there, I noticed.

So I got the bike out, and buzzed around the caches that I hadn't done yesterday. And I got them all! So now  Bedgebury forest is all done. There were some excellent caches - a fill-the-pipe water cache, a fake bird box that was somewhat different to others I've seen, and a musical cache! First, I found a box containing a door chime press. Then I walked back to the bike, pressed the button, and followed the sound of the chime! I had consdiered doing a cache like this myself, and even got the chime, but then I got worried about battery life.

I finished at about 3pm, then went to do a series of ten caches nearby - done on foot, but I can tell you now that they were quite bikable. That was where I saw this: 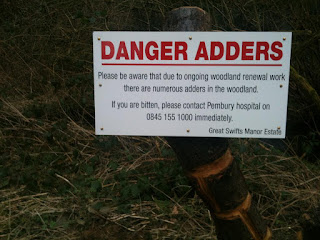 I didn't see any, though.

To finish off, I did a nearby puzzle that I'd solved ages ago; a one mile walk to get to the cache and back, which also, it turned out, could have been done on the bike.

About which ... the rear brakes needed new shoes - the old ones are only a few weeks old. I don't know why they wore out so fast.

More worryingly, the main crank bearing looks wonky. There's too much play in the pedals, and I think that's the main bearing. I don't think that's a job I could do, I don't have the right tools. A trip to the bike shop is required soon. And a fair chunk of change.