Power for the Pies

Getting good power for a Raspberry Pi is, I believe, the key to successful Piery. Here's my latest effort. 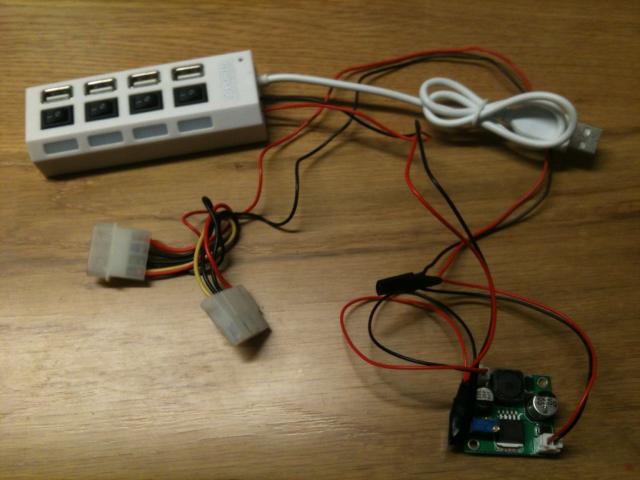 Bottom left, you see a couple of Molex plugs; they came from an old case fan that's no longer working, but the wires come in handy. That's the sort of connector that plugs into a PC power supply, and I've connected up the 12 volts line. You'll see on the right, that is connected to a little PCB. The heart of that PCB is an LM2596, the chip that converts DC voltage from anything down to anything a bit less. So here, I'll be asking it to convert 12 volts to 5. But if you look carefully at the PCB, you can see towards the front, a blue thing. That's a variable resistor, and by twiddling the tiny brass screw on the right of it, I can adjust the output voltage to anything I like from zero up to a couple of volts below the input. So, it the Pi wants a tiddly bit more than 5 volts, I can arrange that. The LM2596 board costs a couple of pounds.

From the LM2596, you can see two wires that go to a USB hub. This hub is sold as an unpowered hub, but actually, the only difference between a powered hub and an unpowered hub, is whether you give it power that doesn't come from being plugged into a computer. So I'm feeding 5 volts into the "unpowered" hub (which cost a couple of pounds), and the USB connector that's on the white wire, plugs into the Pi. That does two things - it give the Pi the power it needs, and it also means I can plug four more power-hungry devices into the hub without the Pi feeling starved of power.

I can also use the four outlets of that hub, to power more Pies. The LM2596 can handle two amps, so it should be able to power four Pies.

The power that feeds all this, comes from a PC power supply. They cost about £7 for a cheapo (and I don't see why you'd need anything better), but I'm getting them for free, because there's something that happens to PC power supplies after a long time - they become weak and feeble, and unable to deliver enough power for a PC. But they'll give more than enough for a Pi, and if the voltage they supply is less than 12 volts, it doesn't matter because the LM2596 takes care of that.

I think this is even better, and cheaper, than the Hobbycraft thing I've been using. So I've ordered three more; these are the de-luxe version, with an LED display that shows how many volts they're outputting.. And they cost £3 each.