Last night, I had a dream - I went out caching and didn't take my head torch. I think this is your basic insecurity dream.

Two loops of 50 caches each, how could anyone say no? Of course, I only did one of them - 12 miles, and I'm now ready for the breaker's yard. I only just managed to stagger back to the car, after 7 hours of walking; by then it was dark (and I did have my head torch). Today I did a total of 55 caches (three extras en route, and a couple of drive-bys after I was done). So lunch happened at 5:30 today. It's all good for the diet. And tomorrow I'll sleep late and take it easy. Ladysolly has already refused to go out this weekend, she says it's to cold for her. She doesn't agree with my theory that there's no such thing as cold, ther's only insufficient clothing.

Along the route, I saw this. 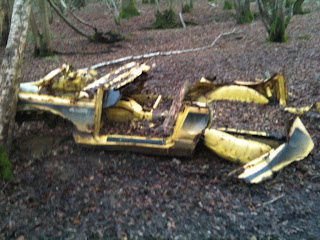 I got really muddy again - some of the tracks were just slippery quagmires.


And when I got home, there was a nice surprise waiting for me - seven Raspberry Pis (six extras that I'd ordered, and one replacement for a DOA). And they also did a credit note for the other one that was broken on arrival (the capacitor wasn't soldered on, or rather it had come loose in transit). They said I could keep that one, so I'll have a go at repairing it.

Geocaching Robotic Arm Two is coming along nicely. I've got all the parts of it working nicely, now I just have to put it all together and test it carefully. I'm hoping that some of my blog readers will help with the testing. I'll tell you more when it's ready!