Now that the snow has melted (well it has around here), I was able to go out again. I went to London, because A) it's Sunday, and I don't like going to London on any other day and B) I'm guessing that the ground is extremely soggy, so I wanted to be on tarmac.

My main objective was the "Lost river Fleet" series, following the Fleet from its source on Hampstead Heath, down to the Thames. I'd already done a few of them, and I was hoping to complete it.

First I did the two on the Heath; I parked nearby and biked around the Heath, picking up the two that were there. Then back in the car, I did a few more on the way to Kings Cross, where I parked, and estabished a base.
I got the bike out, extra batteries in the panniers, a head torch, and off I went. Along the route following the Fleet, I picked up several others. But when I got to the end, I was still missing two letters, so I didn't try for the bonus. But I think I know where it is, so I'll try some other time.

Then, as I was already on the bank of the Thames, I did a virtual that was about a mile away. I had to find an unusual tree. I was looking for a very twisted oak, or something like that - what I found was this! 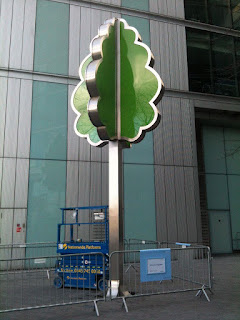 Also on the bank of the Thames, I saw HMS Belfast. 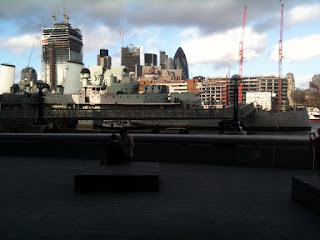 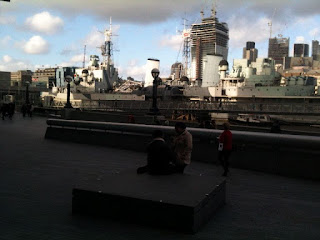 Coming back over the river, I crossed via Tower Bridge, always a treat. Then a couple of virtuals, then a few trads and solved puzzles. I also tried to complete "Alien Invasion", but I couldn't, alas.

I got back to the car after dark, about 6:30, had lunch and trundled off home. A very good day out, 39 caches done and no DNFs.