Up north again. I like this area, there's very few stiles.

When I set off, there was a snowstorm going on, but I had faith, and by the time I got on target, the weather had cleared up, so no rain or snow. But it was very cold, so cold that for part of the route, I was worried about skidding on the icy track.

I warmed up after an hour or so, and was fairly warm as I rode along, but round about 4pm, the sun had gone down and it turned really cold.

I started this series in the middle, because that was in the town, which gave me a good place to park and a good base for after the series. The series went well; at one site I found two caches, and at the next I found none. I thought at first that maybe someone had carried the cache to the one with two, but then I spotted the cache, it had fallen to the ground.

I also tried to do a series with a bonus, but the way the cache setter had done this, you had to get all the individual caches or you stood no chance at the bonus. And one of the cache, I just couldn't find. Maybe it's missing?

This was an interesting sight. 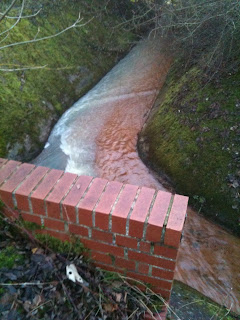