The big news today, is that ladysolly's iPad mini arrived. She hasn't looked at it yet.

And in the morning, bits for Pies arrived; the 8gb SD cards, and the USB-to-microUSB cables, which I need to power the pies. The unpowered powered hubs already arrived (they're powered hubs, but don't come with a power supply). So I converted a couple of power supplies I had that were doing nothing; 5.15 volts and 2 amps, ideal for Pies. And when I plug them into the powered hub, a little blue light comes on, and there's a little switch for each port that has a blue light when you power it on. Very pretty. I should be able to power up to four pies from each one. 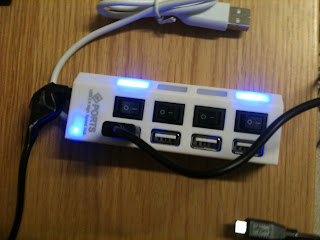 I took the photo above with my iPhone. And then to get it onto the computer is a whole performance; I have to connect it to the USB, tell iTunes to go away, tell it "Yes I know I don't have audio on this computer", find the picture and copy it. So I had an idea, and I emailed it to myself instead. Much quicker, and it doesn't actually go across the internet and back, because my mail server is right here.

After power-washing the bike yesterday, I went to oil the chain, because powewr-washing seems to drive all the oil off and it starts going rusty. As I was doing it, I found that the freewheel was a bit too free. The pawl wasn't engaging on the ratchet at all, wihch meant I could pedal till my legs turned blue, but no power would be transmitted to the wheels. I took the rear wheel off, and had a look. I oiled it, in case that helped, which it did, but only slightly. I was still only getting the pawl engaging intermittently.

When you're in the middle of a muddy field, six miles from the car, you don't want that sort of failure. So I decided that this wasn't anything I could fix, and took it down to the bike shop. The man there saw the problem at once. "New gears", he said; the freewheel and gears are all part of a single unit. £25 and ten seconds later, he'd fitted the replacement, and it was looking good. But he also told me that the bearings were going on the wheel, and that would need replacing in the not too distant future. But OK for now.

And while I was replacing the wheel, I noticed that the back brakes were very worn. Probably good for a little bit longer, but since I had everything in bits, I decided to replace those too.