Up to Milton Keynes again - if I can get the Green bonus, then I'll have all I need for the Golden Bonus. I already have some of the Greens, so there's another 16 I can get.

First, get the bike together, and that's when I discover that my new battery, B8, can't interface with the bike. I had a similar problem with B7, I have to push it *really* hard to get it in place. With B8, it just won't go. I might have to file something down a bit.

So, on the road ... or rather, on the bridleway. The next thing I discovered is that all the rain in the last few days has made the ground really, really soft, and so biking is difficult. I started at Green 10, and worked my way along. I did Green 3, and then looked over the style. And this is what I saw. 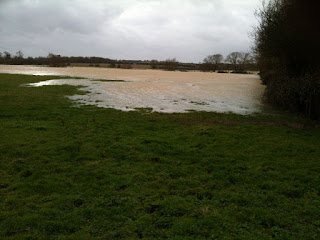 So, back to the car to complete what I could of the series. I also had one DNF, so that's three of the Greens not done. But I got the bonus, that's the main thing.

Where did this flood come from? It's the river Tove, which is a triburary of the Ouse. Here's what the Ouse looks like: 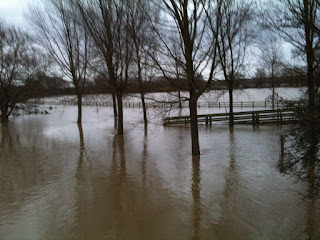 And to give you some idea of the depth: 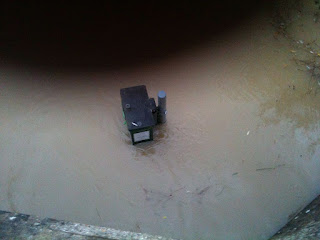 That's a dog poo bin; I'm guessing that it's on the footpath along the river. It's up to its chin in water.

And here's the view on the other side: 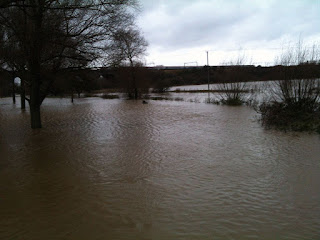 Water as far as you can see.

So I gave up after I'd done the Greens, and went shopping in MK at Evans Cycles for knee protectors.