Raspberry pi jam, and a day out caching

I attended the fourth meeting of the Milton Keynes Raspberry Jam, held in Bletchley Park. It was a good meeting to go to; I had a look at projects that other people were doing, helped out slightly with a bit of linux knowledge, got a few free stepper motors and batteries, gave out a couple of free hard drives, found someone who could supply pies at the drop of a hat, with a very slim markup on the usual price (as well as lots of other very interesting bits and pieces, http://skpang.co.uk/catalog/index.php), told people about my own pi project, the Geocaching Robotic Arm and hooked up with smstext for the afternoons caching.

After the meeting, I toddled along to the National Museum of Computing to see the Witch, the oldest working digital computer in the world. It uses a mixture of decatrons and relays, and can multiply two numbers in only 17 seconds. 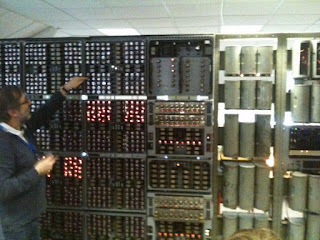 It makes a lovely whirring and clicking noise as it operates. It's wonderful that this grand old lady has been brought back into use.

Then we saw several other computers, including the Elliot 803 and 905 that I used 42 years ago, and finally on to Colossus. 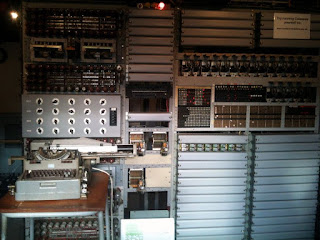 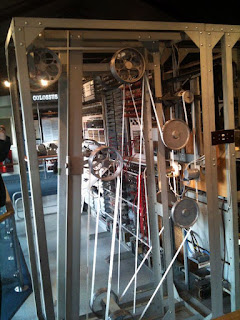 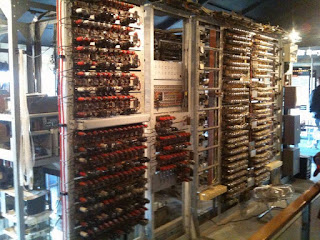 Colossus wasn't what I'd call a computer, it didn't have the ability to change execution on conditions. But it's certainly a very significant ancestor of the digital electronic computer, and it's great that they've resurrected one.

Then on to caching. Since I'd hooked up with smstext, I thought we could do the MKBW Grey series, by leaving a car at each end, then walking the route. That worked well, and I was very glad I hadn't gone by bike, because at one point we had to go through water six inches deep, and at another point we had to improvise a bridge using a plank, over water that was at least 18 inches deep.

After walking that route, we then went on to do Norfolk12's new night cache, and finished with the MKBW Golden Bonus.

An excellent day out!