Up North to Papworth, home of the famous hospital. I did a series of ten Hitchhiker's Guide caches, but although I checked each cache carefully for the bonus number, I only found three out of the six; not enough to go for the bonus.

I also had rather a lot of DNFs today. But on the plus side, I did a very nice multi, and a smashing puzzle cache. Imagine you're creeping through the wood at night by torchlight, you find a tree stump that looks a bit wrong, you move the slugs away, open it up, and something jumps up and screams at you. I was quite proud of my bladder control.

The puzzle cache was good also; first, I found a large ammo can full of 35mm micros, maybe a hundred or so? And each of them had a latitude or longitude, and I had to work out which were the true ones, among all the decoys. But I had a flash of inspiration, and found the final. 33 caches today, not a huge number, but a good day out. 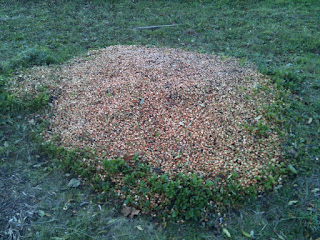 "it doesn't take much to see that the problems of three little people don't amount to a hill of beans in this crazy world" is from  Casablanca.
Posted by drsolly at 21:29