The folks up at Milton Keynes have been busily putting a ring of caches on the 65 mile circumferential walk. Wow. Not something I'd try to do in one lump! But the problem with doing it in parts, is that you have to start somewhere, do a series of caches, and then walk all the way back to where you started.

Or ride a bike.

I decided to start with the Yellow series. So I parked near number 24, and did them in reverse, just to be different. The route was very bikable; I had to lift over only one stile, and the track was very firm, despite all the recent rain.

It rained all the way up the M1, but when I got there, the rain had just stopped. So I got the Technobike out of the car, loaded it up with two extra bike batteries, my head torch (just in case), my lunch, bike repair tools, and set off.

A couple of them were a bit difficult, but I persisted, and got the full set, plus the bonus.

Along the way, I suddenly found that I couldn't ride the bike in low gears (it kept slipping gear), but it was fine in higher gears. That usually means that the smaller cogs have got clogged with grass, so I stopped and had a look. They were clogged, but not with grass, they'd picked up a strip of canvas which was wound round the lower gears. And then I saw where it had come from - it was one of the straps from my pannier. So I got the strap out of the gear (apparently undamaged) and shortened it by tying a knot in it, and now it's fine.

And then, on the way back, I took a different route, and picked up several others. I got back to the car at 16:30, just in time for lunch :-)

One of the caches I did had this little fellow: 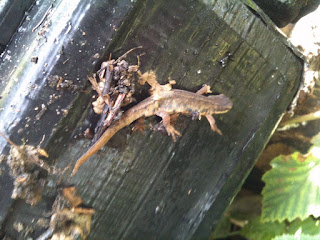 It scooted off when I tapped the box.

And here's another animal, seen yesterday while out with ladysolly: 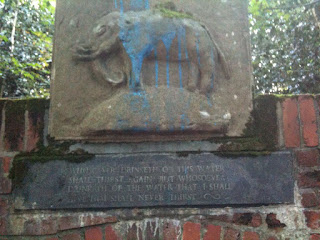 After my late lunch, I got back on the bike and had a go at Oakhill wood, which was also nearby. But the tracks in the wood started off as not good, and deteriorated from there, until eventually I found myself bushwhacking across the undergrowth, which is difficult enough on foot, but when you're dragging a bike along ... very bad.

And then it started to rain.

So I only managed a few in the wood, and got back to the car really wet, and very tired.

An excellent day out!