It was wet on Sunday and Monday. I thought it was going to be wet on Tuesday, but it wasn't. Today, parts of the country would be wet, but I was hoping that around Oundle it wouldn't rain. So that's where I went.

It rained all the way there, but when I arrived, the rain stopped. I parked near a disused hotel, kitted up and set off.

The first route I did was Sonny's Moo Poo series, which richly lived up to its name. Many of the caches were really difficult, and I DNF'd two of them, and also another one en route. Then I biked around Oundle itself.

When I was a nipper, I went to the Grocer's Company School in Hackney. Oundle school has the same parentage. 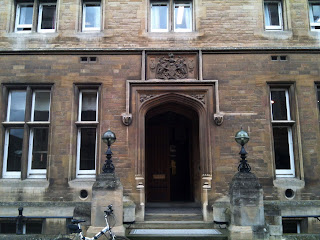 If we look at the coat of arms above the door, we see: 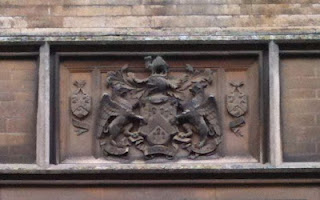 "God grant grace" was our school motto (I never did understand what it meant). You can also see the shields with the cloves - it was the spice trade that made the money. And at the top, you can see Humphrey the camel (well, that's what we called him).

And I finished up with a trundle around Ashton. 35 caches and 4 DNFs. No tumbles off the bike, and I only got slightly wet, because it didn't rain until I was about to set off for home.