On Sunday, I went up North and did three rings. The first was 20 caches, then back to the car for lunch and a battery change for the bike. Then a short relocate and another ring of 20, and back to the car again for coffee and another battery change. And then another relocate and a ring of 15 or so. Great weather, and I found them all except one, which, according to a subsequent log, had the coords badly askew.

Battery 6, the most recent, is excellent. Battery 2 is really good. Battery 1 is weak, and battery 5 is moderate.

There was some sort of horse thing going on while I was there. I stopped by a little wooden bridge in the middle of nowhere to hacve a quick p, and I'd just whipped it out when I noticed a landrover beetling down the field toward me. I hastly replace the item, and tried to pretend I was admiring the view. But the farmer stopped, wound down his window, and I thought, now here it comes.

But he was just being friendly, and he told me that the very bridge that I was about to cross had been the scene of a nasty accident. A woman went across on horseback (it's a foot bridge, not for horses), and halfway across, the horse lost footing and tumbled. She went down into the gully (it's about 10 feet down) and the horse fell on top of here. That's pretty much what happened to me a couple of months ago, except iy was only 6 feet, and a bicycle falling on you isn't as bad as a horse.

She broke her pelvis, and her friend who was with her called 999. But she didn't know where she was, and the emergency services couldn't find her, even with a helicopter. She was found in the end by a gamekeeper.

And he also told me that the horse thing is an endurance trial.

And I went on my way, wondering if horses actually enjoyed an endurance trial, since it's them that's doing all the work, not the rider.

So, that explained the arrows I was seeing sprayed on the ground. 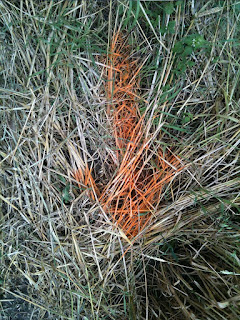 And then, as I was biking through a field of ripe barley, I got the explanation for how they persuade the horses to take part in an endurance test. 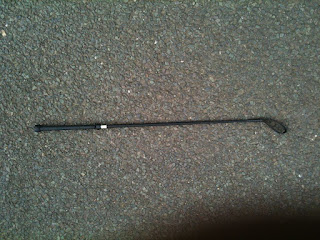 I already knew that they used whips in horse racing, although I can't understand why it's permitted. But I didn't know they also use them in trotting around the countryside. Do these people actually like horses?