Three circuits and a trundle

Very early today, I visited my dentist; he's going to do something about my broken front tooth (it broke a couple of years ago). His first attempt was to build a fake tooth on a pin, but that keep coming loose, so he recommended that he does a bridge. This means, he makes a tooth, then ties it to the tooth next door. That sounds fairly painless, but he also wants to remove the old tooth root, and that's going to be seriously unfun. Still, needs must. Thank goodness for local anaesthetics.

So today, he took an impression of my dentition, so that the replacement tooth can be made. That wasn't a biggie, except that I have a strong gag reflex, and I had to concentrate to avoid triggering it. The whole process was over in five minutes, so I had the rest of the day to go out caching.

First, I did the last remaining circuit of the Geolympics Marathon; I now have completed all five rings. Along the way, I met a nice couple of cachers, and we found a couple of caches together, but because I was on the bike, I soon left them behind.

Back at the car I had lunch, which consists of one low-calorie sandwich, and two Tesco-prepared fruit boxes, which are low calorie, and delicious.

Then on to the second ring of the day, the Stonor Circular. The route looked very steep, so I decided to do it on foot. Then an additional group of three nearby, also done on foot. Here's the big house along the way. 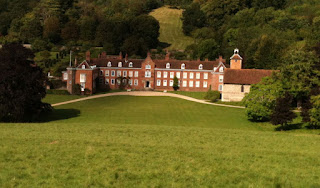 And then a short intermission - the abandoned church at Bix Bottom, which, apparently, has been the location for horror films. I've done a cache here before, but that was archived, and there's a new one here now. I solved most of the puzzle, decided I could go without one of the numbers, parked near the church, and wandered around. I went into the church; some people say it's spooky, especially at night, but I'm an atheist, so ghosts don't affect me. After wandering around for a bit, I spotted something that fitted the hint, and there was the cache.

Then on to the Dunsden Dawdle; a 20-cache circuit which I did on the bike. And I finished off with a couple of drive-bys in Caversham. 52 caches, one DNF, and a very good day out.

Also, a couple of recent purchases arrived today. The first was a Fujitsu Loox, the same PDA that I use for caching. I got it for 99p (plus £3 P&P) from Ebay, and although the previous owner said it wasn't working because it was lacking a battery, I put in a battery and it's working perfectly!

The other thing that arrived was  ... yet more panniers. These cost £13.48 from Rutland Leisure Outlet, including P&P, and they look to be in the same class as the Altura panniers that would be about £45.
Posted by drsolly at 21:00