Yesterday was forecast to have rain in the afternoon, so I thought, I'll do a bit of urban. I loaded up three batteries in my panniers, and some water, and set off. By the time I got back to the car it was 4pm, I'd done 40 caches, and the rain had been a mere slight sprinkle. I was starving by then, of course.

I made a severe navigation error at one point - I went South of town, and after doing the caches I was aiming for, I went back via what I thought would be a good track to return on. But the "good track" ended in a severe gate, with no way through, and I had to retrace my path to get back to town; I must have added a couple of kilometers to my travel.

So I put the fourth battery on the bike, and set off for a final loop, along the river and railway. I was very pleased to get one of the "Thomas the tank engine" caches, because it was a vital one that, I think, has told me where the final cache in this series must be.

While I was out, I solved the problem of why my panniers are taking so much damage. It's because they're riding too low, and fouling the kick-stand. So today I took a spanner to the bike and added a few inches to the clearance.

Also in that outing, I determined that battery no 1 (which as you might have guessed is pretty old) was so weak that it could only do a mile or two, and it's time to retire it. So I've ordered a fresh new battery from the same place that I got battery number six.

Don't let anyone tell you that electric bikes are economical, on account of the electricity costs a fraction of a penny per mile. That calculation doesn't take into account the limited lifespan, and very high cost, of the batteries.

While I was out, I saw this rather nice sculpture. 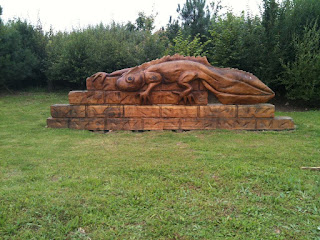 I did 36 kilometers while out; no way could I do even half that on foot. Biking is magic.