Out to Blackwater, Essex yesterday to do more of the series I did a couple of weeks ago. It was raining as I drove down there, in contradiction of the weather forecast, but by the time I got there it was just a light drizzle. So I got the bike out, put on my light waterproof camo coat, loaded up with three batteries and two bottles of water, and set off.

I was on techobike.2, because .1 still has something wrong with it. I've got it up on the bike stand, and the motor seems to be running, but had less than half speed. I wonder if it's the controller? I soon discovered that I have the positioning of the back rack wrong. It's as far back as it can go, but I'm still fouling the saddlebags with the back of my boots. Some work needed. I also need to fill up the hydraulics on the front, they make a slurping sound every time I go over a bump.


Within half an hour, biking through grass had made my boots wet. And my boots aren't waterproof, so my socks got soaked too. I spent the entire day with wet feet. Lesson learned - don't wear those boots when the ground is wet.

I found this picture in St Lawrence, I think it's all over the place. 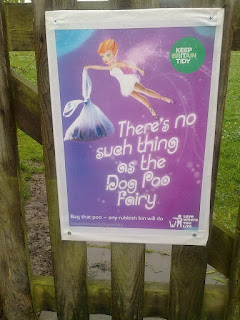 At one point, I found myself on the wrong side of a ditch, and the ditch had a small stream at the bottom, and lots of the sort of mud that I know from experience doesn't carry my weight, and doesn't have a bottom. It was either detour a long way to get on the right side, or jump the ditch. So I jumped, knowing that my feet couldn't get any wetter. And, of course, I sank into the mud.

And, while on the subject of mud - at one point, I had to cross a mudflat with the bike, and it was the sort of clingy gluey mud that jams itself into the bike so thickly that you can no longer move, and you have to stop and dig some of it out.

At another point, I found myself on the wrong side of another ditch, this one without mud, but with water. I left the bike behind, walked 200 meters to get the cache, then walked back. Walking in wet boots and sopping socks is ... different.

So when I did get to the sea wall, I looked up, and dimly in the distance I could see the cubes of the Bradwell Nuclear Power Station. A long, long way away. And I knew that was where I was heading, because that's where I'd started last time I was here.

Most of the track was bikable, although at this time of year it's very overgrown, and the water was entering my boots so freely it felt like I was barefoot.

Along the way, there was a cache I tried to do, where the mud underfoot was so slippery and slidey, I nearly went over a few times, and after spending 20 minutes on this I gave up; better to have a DNF than to fall over and possibly also fall into the water.

Eventually I got to Bradwell Waterside, where I found that a track I'd planned to follow led over 50 meters of water, and wasn't a track at all, so I had to backtrack (and thats where I got the bike clogged up, again).

At Mill End, I saw this. I bet you don't get many of those to the dozen. 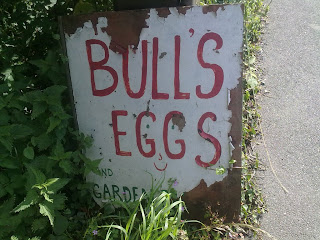 And from there, back to the car. I was out for seven hours; it really was a struggle to get round, what with ditches to cross, mud to clog, soaking socks, lifting over stiles, and I was pretty exhausted, and was able to manage just two more caches before getting back to home. 41 caches today, and a really cracking day out.