I went north today, to do a Poshrule circuit; I'd actually planned to do two, but the best laid plans...

Adter several caches, I met some farmers. They were haymaking in the adjoining field, and they could see me rummaging. After a while, one of the haymakers strolled up and asked me what I was doing. "I'm counting the slugs" I explained. "You're looking for insects?" he asked. "No, I'm counting the slugs." He looked at me. "Do you have permission?" he asked.

Well, I've never been asked that before. It's a public footpath, and that means that I'm entitled to walk along it, but I guess I don't actually have permission to count the slugs. "Nice weather for haymaking," I replied. "Yes," he agreed, and went back to his tractor.

Then on cache number seven, I had trouble. Getting to here from number 6 was terrible. It's a field of rape, and the plants are full size now, and falling across the track. Walking through would be bad enough, but I was also pushing a bike. I was very glad when I reached the road.

This is what the field looked like. You can just see the slightly lower density of plants that's the "footpath". That left me exhausted. 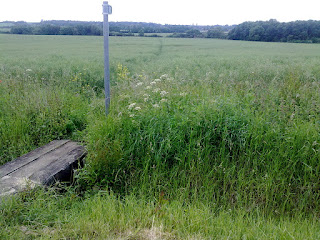 At number nine, I had to cross a stream. No bridge. Pushing a bike. It was no surprise that I got a bootful of water.

Number thirteen is where I got really unlucky. As I was crossing the bridge, I was wheeling my bike on my left. I moved slightly to the right to give the bike more room, trod on the vegetation next to the bridge, and discovered the hard way that there wasn't actually anything to stand on. So I toppled over to my right into the ditch. And, of course, the bike fell on to me. And the saddle bags.

I lay there for a minute, working out what had happened. Then I took off my helmet, which had gotten tangled up in something, took off my shoulder bag, and found the two pieces of my plastic PDA holder, which had fallen apart, I was very pleased that I'd managed not to fall on my PDA, and it wasn't in the water, and I hadn't destroyed it in my struggle to get myself together.

Oh, I forgot to mention - the whole of my right side was in the water.

So I struggled to sit up, extracted myself from under the bike and the saddle bags, and got myself out of the ditch. I was able to rig up something to hold my PDA out of elastic bands, and was delighted to see that it was still working. Which meant I could continue.


And it was at this point that my throttle packed in completely. I've been having intermittent problems with it, but now it was kaput. Which meant that I now had a bike, but not an electric bike. Or rather, I did have an electric bike, with all the extra weight that it includes, but I had no battery assist.

I looked at the map; it looked like it would be easier to press on, so I did.

When I got to the end of that path, I was at a road. Now my shoulder was painful from the fall I'd taken a couple of caches previously. Also, the throttle on the Technobike had failed; I could pedal, but I wasn't getting any electric assist. I decided to cut the day short; I'll come back and do the rest of the series some other day.


But probably not tomorrow. My right shoulder really hurts.

When I got home, I took the throttle apart, which works on a principle I've not met before. I couldn't see what was wrong with it, so I gave it a bit of a clean, reassembled it and now it seems to be working fine.


It's entropy. Just when I've stopped getting a pain in my right hip, my warts have cleared up and my loose false tooth has been reinstalled tightly, I thought I was in fine fettle.

Pride goeth before a fall.