I went up North, to Kings Cliffe and did 72 caches.

First in the morning, a circuit of 30 caches plus three along the way. I lost my way a couple of times, but the backtrack needed wasn't far. There was a short shower along the way, but the weather was mostly fine. I only needed to lift the bike over a stile once.

Back to the car, and lunch, followed by a short drive to the next cache. On with the wellies, and into a river, under a bridge. I went across the river and back before I finally spotted the cache, smaller than I'd been expecting. I used my wellie-remover to unboot, that's so much easier than trying to pull them off. 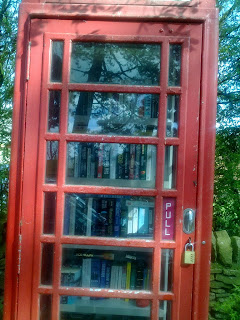 I've heard of a phone box being used as a library before, but this is the first time I've seen one. Very nice.

And then to the second circuit of the day. Somehow, I'd got the idea that it was a circuit of 20 caches; actually it was 25 plus a few extras. This was one of the extras: 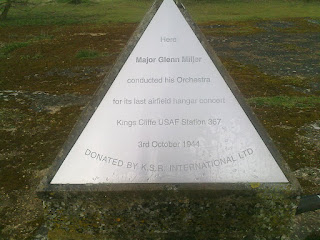 I'm a big fan of Glenn Miller and the big band sound.

Along the way I picked up another cache, at a tunnel under a disused railway. It took me a long time to find it, because I muddled up East and West and was looking in the wrong place. But even when I got that sorted out, there were a lot more wrong places to look before I finally found the right place.

Round about 3pm it rained, quite heavily and I got a bit wet. Then sunshine, but at about 7pm, I got struck by hail!There were a lot of stiles to lift over on this circuit, half a dozen at least.

Back to the car at 7.30, for coffee and yumyums, and then off the tackle the last objective of the day. On the way there, I picked up a couple more, but when I got to where I was going ...

This was a puzzle cache, and you had to do an online jigsaw. I'd done that, it only took me about an hour, but when I tried to print out the picture, I did something wrong, and lost it. And I needed that picture, because that was what told me where to go to find the cache. Oh well, I thought, I can probably remember what it looked like, but that meant that I had to do the cache today, becuase my memory would lose that picture within a day or so.

So I went to where I thought it would be, and it wasn't there. Oh. It's now 8.30, and it's getting dark, and I've only got half a gallon of petrol left in the car - I decided to head for home.

But after a couple of miles, I jammed on the brakes. I'd just spotted something that looked very like the picture I hadn't printed out! And when I checked in the tree opposite, sure enough, there was the cache. Hurrah!

So now I really did need to head for home ... but on the way to the A1, I picked up a few more caches. And as I was going round the roundabout to get onto the A1, I spotted green neon lights about a mile away, which looked like ... yes, a BP petrol station. Filled up (I was down to the last quarter gallon at that point, although I should mention that I do keep a gallon can in the car for emergencies, so I wasn't being quite as silly as it sounds) and trundled home, getting back at 11pm (ladysolly had given me a Late Pass, because she was out playing bridge).