Out to Peterborough today, for a total of 77 caches.

Zooming up the A1, hoping that I'd be able to score some petrol somewhere, otherwise I'd be sleeping in the car tonight and ladysolly would be livid.

I parked, got the bike out, loaded it up with batteries and water, and set off. In the wrong direction. After a few yards, I realised, and turned round.

At cache number 11, I was just signing the log when I realised ... I keep my wallet in a zipped-up compartment in my shoulder bag. The zip was open, and there was no wallet there.

So I thought about it. Maybe it dropped out at one of the caches I've done so far - not too bad, there's only ten places I'd have to look. Then I remembered - when I bought my sandwich (note the singular, drsolly is on diet) I emptied all the change from my wallet into the tub I keep change in, and took the tub into the shop. I know I didn't take my wallet in. And I don't remember putting the wallet back into the zipped-up compartment. So, it's probably sitting in the car, on the front seat. And I did lock the car. I'm almost sure I locked the car. I hardly ever forget to lock the car. Gulp.

I decided not to go back, but to press on.

A bit further on, I noticed that my back rack had almost come off. Fortunately, I keep a screwdriver in my portable toolkit, so I was able to tighten it up again, but in doing so, I noticed that my lovely new panniers are coming apart at the seams. Needs repair! Needle, thread and duct tape. I'll do that tomorrow.

So I went round the route I'd planned, 34 caches, all on the bike, and when I got back to the car, I eagerly checked ... and there was my wallet. Whew!

So then I continued on the second circuit I'd planned, and enroute, I picked up a puzzle cache.

At the cache site, a quick find, but just as I was signing the log and replacing the container, up came a carload of dogs. A human got out with two small yappy doglets on leads, and then another human got out, followed by a flood of big dogs without leads over which he very obviously had no control whatsoever.

By that time, I was on my bike and pedalling hard.

It turns out that a man on a bike can go faster than a pack of dogs, especially if he has electric assist. I heard the human behind me yelling with increased desperation for his dogs to stop chasing me and come back. But, of course, they didn't. But I didn't care, I was well in front, on a tarmac surface, and no way was I going to stop. I left them behind eventually. I hope that their owner managed to round them up eventually, but it looked to me like he was likely to lose a few.

A couple of miles further on, I came to the Sutton Cross, but first: 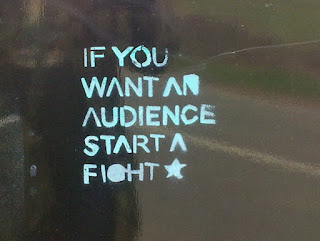 I was so tempted to cross out the "is" and insert "are", but that would have been vandalising the vandalism.
If you look carefully, you can see me reflected in this. 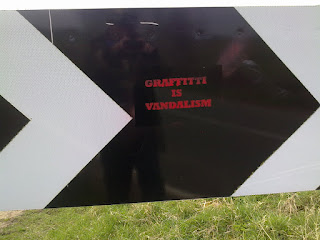 I wasn't expecting this:

And here's the cross. 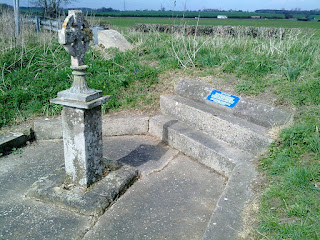 I completed the circuit, and by that time, I'd done about 60 caches. So I had my coffee, and then did a bunch of drive-by caches.

And as I was finishing off, I noticed that my brakes weren't working properly. Eeekkk! After a bit of testing, I decided that they were good enough to get home on if I was a bit careful, which I was, and I got home without any problems. And I did managed to score some petrol, but the price seems to have jumped up a bit. I'll have to have those brakes seen to. I don't think it's just a matter of topping up the fluid.

An excellent day out, with lots of adventures!

Email ThisBlogThis!Share to TwitterShare to FacebookShare to Pinterest
Labels: geocaching