Down to Sussex today, to do a ring at Wiston. The first part was 55 caches, and I did it on the bike in 5 hours, which is pretty good. The second part, another 21 caches, I did on foot in two hours, also quite fast, especially considering my gammy thigh. And no DNFs.

I had a neoprene reinforcement round my left knee; I'd bruised it badly a few days ago while dismounting from the bike, and I wanted to protect it from further damage; that worked well.

I did the first 37 caches using battery number 5; I was amazed that it went on for so long, I normally expect to get 25-30 out of a good battery, and I'd thought that number 5 was one of the weaker ones. Maybe it's to do with the charger; I'll keep a record in future of which charger I use for each battery. 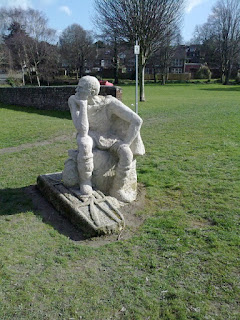 I found the above in Steyning. You can see what he's thinking - "Where's that elusive cache?"

Later on, I was crossing a field when I saw a sheep that thought it was a poodle. 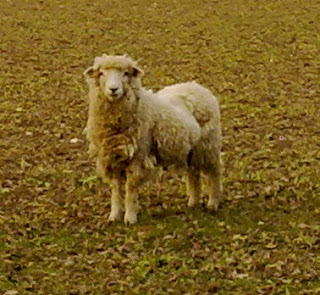 By the time I got back to the car at the end of the day I was well crackered.