Today I went up the M1 to Hargrave, and spent several happy hours biking around that area for a 58 cache ring. Plus a few more after I'd done that, for a total of 65 caches. One good feature of this ring is that it was a figure-eight, which meant that after three hours I was back at the car, and could have lunch, coffee and replenish my bike batteries and recharge the GPS battery. On the second part of the ring, I saw this: 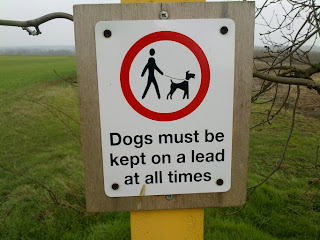 I thought of pointing it out to the dogwalker nearby, and her four dogs, three of which were off their leads, but then I thought, maybe she can't read, and it would embarrass her if I read it out to her. Plus, dogwalkers usually seem to think that any prohibitions don't apply to their particular furry friends.
Posted by drsolly at 22:54