A trip to Shoreham today. A nice day, and the route is 8.5 miles, all bridleways and other cyclable tracks, but for reasons IO can't explain, I decided to go on foot. What a stupid idea! Oh well. Going round took me five hours; on the bike it might have been a bit less, plus I wouldn't be so tired afterwards.

En route, i did the dreaded Shoreham Bridge cache; SimplyPaul and I DNFed it before, and this time I was going to give it half an hour, no more. But after ten minutes, I spotted something out of place. 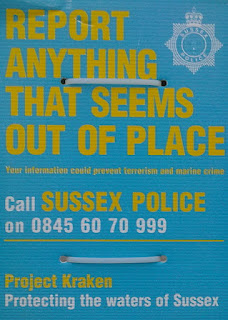 So I called the Sussex Police, and they sent out the bomb disposal squad and a dog unit, plus Trumpton in case it set the wooden bridge on fire, and a couple of ambos for luck. Terrorism has been successfully prevented, and marine crime thwarted.

I finished the circuit, then went down to Shoreham to finish a multi that I'd started a few months ago; a very good day out, 57 caches found, no DNFs.