I took a few days off caching, to catch up on things. But I was out today, on a seven mile circuit.  The gorse is in flower, very nice. 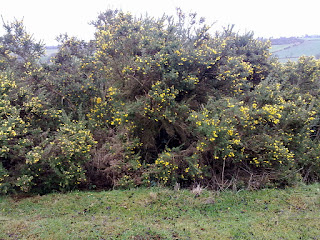 I went back to a cache I'd DNFed on Sunday. I parked, walked 400 meters uphill to a trig point, and had a thorough search. No luck. Dejectedly, I walked back the the car. Half way back, I had a thought. There was one possibility I hadn't tried. And I rapidly convinced myself that it must be right. So I trekked back again up the hill, and sure enough, there it was! It's annoying that they put trig points at the top of hills, it would be much more convenient if the put them in easily accessible places, and on the flat. But do the Ordnance Survey show any consideration for us geocachers? They do not.

32 caches done today, including the one above, and a Suduko cache where the Suduko gives you the combination to the lock around the cache, except that you don't know what order the digits should be in. Not a problem, except that the lock was badly in need of oiling. Note to self - in future, when doing unlock puzzles, take a can of oil! And a very clever cache by Messe, a lot of his caches are top-notch.